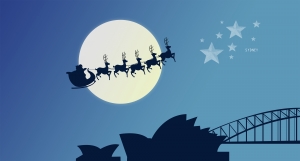 Thanks to list member Clarice M.H. who told me that "The Night Before Christmas in Texas, That Is" was written by Leon A. Harris - a student teacher she had. Clarice wrote, "Knowing my fondness for this poem, (he) gave me a book of it which I still have. Harris copyrighted the poem in 1952. My book is dated 1977." Thanks for letting us know Clarice.

"Pastor Tim, as there are a lot of subscribers to your lists in Australia, I rewrote the "Texas Christmas" piece. I have not requested permission from the writer - I don't know how to contact him - but I am sending this to you any way."

Heather has even supplied some definitions for us "up-over" types (I didn't even know I had a "ute"!) So thanks to Heather for her Australian adaption of Leon. A. Harris's "The Night Before Christmas in Texas, That Is"

Twas the night before Christmas, In Australia you know,
Way down on the beach, without any snow.

Asleep in their beach hut, were Bud and Sue,
A dreaming of Christmas, like me and like you.

Not stockings but jet skis , at the foot of their beds,
For this was Australia, What more need be said?

And I saw 'cross the sand dunes, like the shot from a gun,
A loaded up ute, Come on at a run.

"Come on there Blue, Dfor, and Dog, hold on tight
There'll be plenty of travelin' for you-all tonight..

The driver in his bathers, and a towel that was red,
Had a bright red sun hat on the top of his head.

As he stepped from the ute, he was really a sight,
with his beard so curly and white.

As he burst in the beach hut, the children awoke,
And both so astonished, that neither one spoke.

And he filled up their jet skis with such presents galore,
That neither could think of a single thing more.

When Bud recovered the use of his jaws,
He asked in a whisper "Are you really Santa Claus?"

"Am I the real Santa? Well, what do you think?
And he smiled as he gave his mysterious wink.

Then he left in his ute, and called back in slang
g'day CHILDREN OF Ausie-MERRY CHRISTMAS cooee!

ute. = Short for utility know in USA as pick up
Heelers = Blue heeler dogs
Blue, Dfor & Dog = common dog names
G'day = hello how are you today? keeping well I hope! I'll catch up with you later. (saves a lot of energy talking)
Cooee = used to call out to attract the attention of some one usually used in the bush,