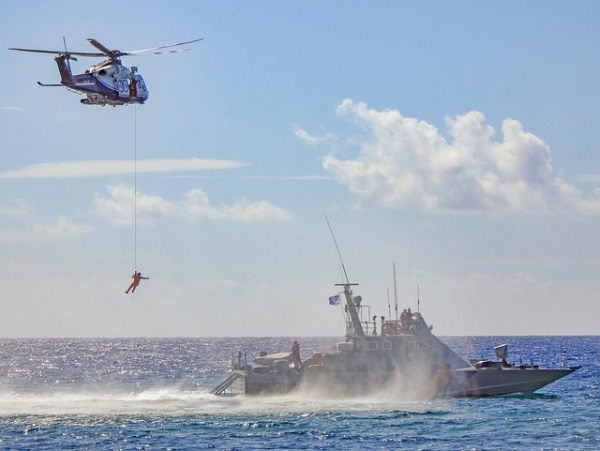 'Twas the night before Christmas and all through each state,
Coast Guard families were starting to celebrate.
Just then from the White House came an urgent call,
A crisis had arisen that would affect one and all.

In fact the U.S. State Department was frantic,
For Santa Claus had just landed in the Atlantic!
It was foggy as ever; Rudolph had made a blunder.
Santa, sleigh, and eight reindeer were going under.

Though the stockings were hung by the chimneys with care.
Poor Santa gurgled, "I'll never get there."
When what to his wondering eye should appear;
But some coast guard cutters with their rescue gear!

The officers and crew were so lively and quick;
Sure was a lucky break for good ole Saint Nick.
With a nod from the captain they went right to work.
Rudolph was embarrassed; he felt like a jerk.

Poor Santa was soggy, but as anyone could see,
He was very grateful to the U.S.C.G!
And we heard him exclaim as they towed him from sight,
"If it weren't for age and weight, I'd enlist tonight!"