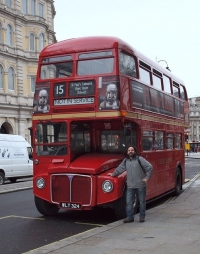 Here we have the London, England version of the poem written by Aussie born Londoner Kim Van Wyck and forwarded to me by Terry Blakenship.

Twas the night before Christmas,
In England, you know,
the planned tube strike went ahead,
the streets full of snow.

Asleep in their terrace house,
were Charles and Jane,
Dreaming of Christmas dinner
And the weight they would gain.

Not stockings but polished shoes,
At the foot of their beds,
For this was Old Blighty,
What more need be said?

When all of a sudden,
From out the still night,
There came such a ruckus,
It gave Charles such a fright!

And he saw 'cross the Thames,
Like the shot from a gun,
A loaded up red double-decker bus,
Come on at a run.

The driver was shouting,
as he drove passed Big Ben,
"Tally Ho, 'Allo Guvna,
What's all this then?"

The driver, in a tux,
And a cummerbund bright red,
Had a matching top hat,
On the top of his head.

As he stepped from the bus,
He was really a sight,
Big fat and round,
His beard curly and white.

He burst into the house,
And the children awoke,
They were both so astonished,
That neither one spoke.

He filled up their polished shoes
With presents galore,
And neither could think
Of a single thing more.

Charles speaking, indirectly,
The way Brits do that's so silly,
Said "Rather sir, I must say, you do look remarkably similar to this chappie reported to be going around the place on nights such as these handing out presents willy nilly."

"Well, maybe I am he"
Said the fellow with a wink
And he smiled as he gave
His mysterious wink

Then he left in his bus,
pausing to say,
An old English rhyme,
passed down through his day: