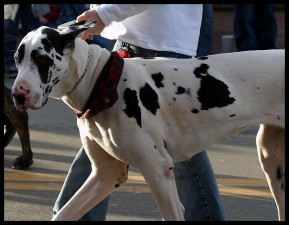 Friends of ours owned a huge Great Dane named "Bear." He looked menacing but was actually quite harmless. Though Bear has gone on to doggy heaven here are two great stories they often tell.

Bear's playground was a fenced yard about 40 feet square. With a mere 3 foot fence his head easily reached over the top. Standing on his haunches it looked like he could walk over the fence. One of the neighbor boys asked the owner if he could jump the fence. "Shhhhh," she replied. "He can - but don't tell him."

Then, One day the man of the house was assaulted by the sound of a stereo large enough to power a theater mounted in a car trunk. Looking out the window he saw what appeared to be a drug deal. No problem, he clicked on Bears' chain and took him out. Marching right up to the occupants and pointing to the dog he mouthed these words over the noise, "My dog doesn't like your music."

The stereo was immediately silenced and the car quickly disappeared from sight.