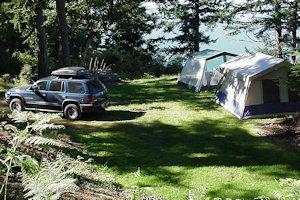 A loaded SUV pulled in to the only remaining campsite. Four children leapt from the vehicle and began feverishly unloading gear and setting up the tent. The boys rushed to gather firewood, while the girls and their mother set up the camp stove and cooking utensils.

A nearby camper marveled to the youngsters' father, "That, sir, is some display of teamwork."

The father replied, "I have a system; no one goes to the bathroom until the camp is set up."