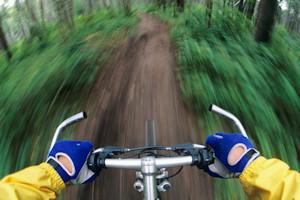 A man decided that he was going to ride a 10-speed bike from Phoenix to Flagstaff. He got as far as Black Canyon City before the mountains just became too much and he could go no farther.

He stuck his thumb out, but after 3 hours he hadn't gotten a single person to stop. Finally a guy in a Corvette pulled over and offered him a ride. Of course, the bike wouldn't fit in the car. The owner of the Corvette found a piece of rope lying by the highway and tied it to his bumper. He tied the other end to the bike and told the man that if he got to going too fast to honk the horn on his bike and he would slow down.

Everything went fine for the first 30 miles. Suddenly, another Corvette blew past them. Not to be outdone, the Corvette pulling the bike took off after the other. A short distance down the road, the Corvettes--both going well over 120 mph--blew through a speed trap. The police officer noted the speeds from his radar gun and radioed to the other officer that he had 2 Corvettes headed his way at over 120 mph.

He then relayed, "And you're not going to believe this, but there's guy on a 10-speed bike honking to pass."