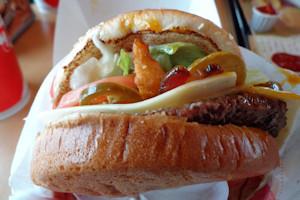 I had just finished visiting a friend in the hospital and stopped by a burger drive-through for lunch to eat on the way back to work. I ordered the #1 combo (burger, fry, coke) for $4.29. She said "that'll be $4.83, please drive forward."

"$4.83? For a $4.29 meal? That's 54 cents tax! That can't be right," my mind raced. Tax is 8 cents on the dollar in Huntsville and for 4 dollars that would be 32 cents plus 1/3 (29) of 8 cents would be 35 cents max. I'd heard of window workers overcharging drive through customers and skimming the money for themselves. Someone did just that to me at a Hardees couple of years ago.

She got a funny look on her face and said that maybe the computer had rung it up wrong or had charged me for the biggie size. (biggie upgrade was 35 cents - which would be 4.64 plus tax which would put it over $5). She admitted it was supposed to be 4.63, and opened the drawer to give me my extra change.

"HA!" I thought to myself. "Six years engineering school has so heightened my mental mathematical adeptness that I can do percentages in my head and my superior intellect has foiled a feeble attempt by a drive-through worker to overcharge me."

I took the twenty cents she handed me, proud of my staggering genius, and smugly drove off without my food.