Can You See Me? 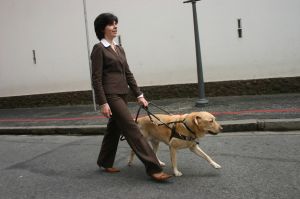 Many participants have a condition known as macular degeneration, which makes it difficult for them to distinguish facial features.

I had just been assigned to a new group and was introducing myself.

Knowing that many in the group would not be able to see me well, I jokingly said, "For those of you who can't see me, I've been told that I look like a cross between Paul Newman and Robert Redford."

Immediately, one woman called out, "We're not THAT blind!"