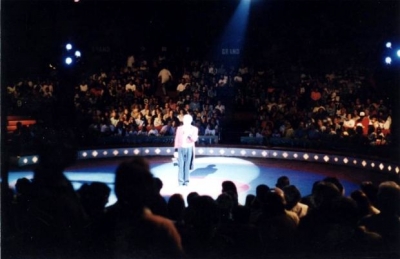 A man decides to join the circus. He shows up to demonstrate his skills to Morris, the circus impresario.

"I have the most unusual act," he announces. "I'm sure it will amaze you."

He proceeds to climb a tall tower, and jumps off. He flaps his arms wildly, and finally his fall slows. He soars forward, then swoops upward, turns and swoops back again. Finally he stops in mid air and gently lowers himself to the ground landing softly on the toe of one foot.

Morris stares blankly at him for a long time. Finally he says, "Is that all you've got? Bird imitations?"