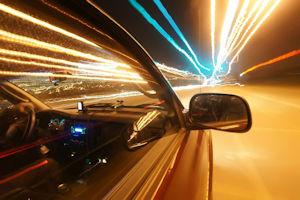 There's a man trying to cross the street.

As he steps off the curb a car comes screaming around the corner and heads straight for him. The man walks faster, trying to hurry across the street, but the car changes lanes and is still coming at him.

The car gets real close, then swerves at the last possible moment and screeches to a halt right next to him.

The driver rolls down the window. The driver is a squirrel. The squirrel says to the man,