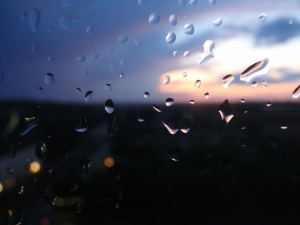 A goober was on the side of the road hitchhiking on a very dark night and in the middle of a storm. The night was rolling on and no car went by. The storm was so strong he could hardly see a few feet ahead of him.

Suddenly he saw a car coming toward him and stop.

Without thinking about it, the guy got into the back seat, closed the door and then realized there was nobody behind the wheel! The car starts slowly; the guy looks at the road and sees a curve coming his way. Scared, he starts to pray begging for his life.

He hasn't come out of shock, when just before he hits the curve, a hand appears through the window and moves the wheel. The guy, paralyzed in terror, watched how the hand appears every time right before a curve.

Gathering his strength, the goober jumps out of the car and runs to the nearest town. Wet and in shock, he goes to a restaurant and starts telling everybody about the horrible experience he went through.

A silence enveloped everybody when they realize the guy was serious.

About half an hour later, two guys walked in the same restaurant. They looked around for a table when one said to the other,

"Look John, that's the goober who got in the car when we were pushing it."