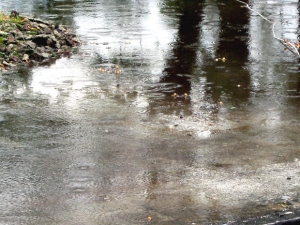 A man driving his car down a country road was forced to stop before a giant puddle blocking the entire way. Looking to the side of the road, the man noticed a goober leaning on a fence. "Think it's safe to cross?" the man asked.

"I reckon so," replied the goober.

Pulling ahead, the mans car was immediately swallowed by the puddle. In fact, it was so deep that he had to roll his window down to swim out and up to the surface. As his head broke the surface the man said to the goober, "I thought you said I could safely drive through this puddle!"

"Well, shoot!" he relied, scratching his head. "It only comes up chest-high on my ducks!"

(Wondering what a goober is?  Find out at www.cybersalt.org/policies/what-is-a-goober)