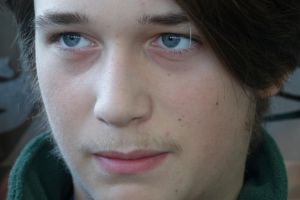 A boy is about to go on his first date, and is nervous about what to talk about. He asks his father for advice.

The father replies: "My son, there are three subjects that always work. These are food, family, and philosophy."

The boy picks up his date and they go to a soda shoppe. Ice-cream sundaes in front of them, they stare at each other for a long time, as the boy's nervousness builds.

He remembers his father's advice, and chooses the first topic.

He asks the girl: "Do you like spinach?" She says "No," and the silence returns.

After a few more uncomfortable minutes, the boy thinks of his father's suggestion and turns to the second item on the list. He asks, "Do you have a brother?" Again, the girl says "No" and there is silence once again.

The boy then plays his last card. He thinks of his father's advice and asks the girl the following question: "If you had a brother, would he like spinach?"