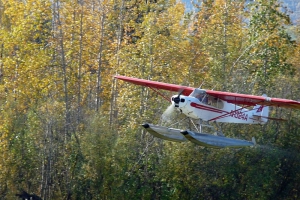 Two Goober hunters got a pilot to fly them into the far north for elk hunting.  They were quite successful in their venture, and bagged six big bulls.  The pilot came back as arranged to pick them up.

They started loading their gear into the plane, including the six elk.

But the pilot objected he said, "The plane can take out only four of your elk.  You will have to leave two behind."

One of the hunters pushed forward, "Hey, last year our pilot let us take out six elk.  It was the same model plane, same weather conditions, and everything.  What's with this?  We want you to allow us to fly out just like last year.

Reluctantly the pilot finally permitted them to put all six elk aboard and the men all climbed in with their gear.  But when they attempted to take off and fly out of the valley, the little plane could not make it.  They crashed in the wilderness.

Climbing out of the wreckage, one Goober said to the other, "Do you know where we are?"

"I think so," replied the other Goober.

"Yep!  I think this is about 100 yards further along than where we crashed last year!"