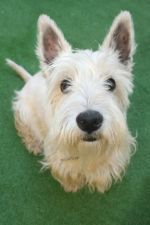 A young couple lived in a town filled with crime.

After three neighbors had been robbed, the couple decided to get a guard dog.

Visiting the pet store, the young wife asked for a good guard dog.

"Sorry, we're all sold out," the clerk replied. "All we have left is this little Scottie dog. But he does know karate!"

Her husband was disappointed and skeptical about the Scottie dog's abilities as a guard dog.

The wife told him about the dog's excellent karate skills.

"Karate, my butt!" the husband yelled.

To this very day, he is still in the hospital.