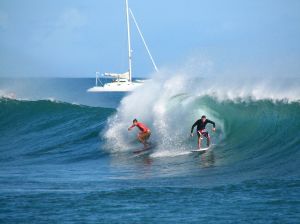 These two persons are discussing whether the state of Hawaii is pronounced 'Havaii,' or 'Hawaii.'

So there they stood arguing and arguing, until they decided to ask a person that was walking by. So they asked a gentleman: 'Excuse me sir, is Hawaii pronounced 'Hawaii' or 'Havaii?''

So they both looked at each other, and as the gentleman was leaving, one of the two said to him, 'Thank you.'

The gentleman replied by saying, 'You're velcome.'