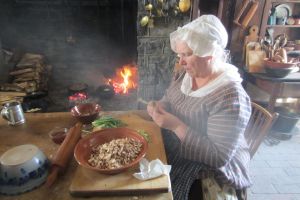 A man goes to his doctor and says "I don't think my wife's hearing is as good as it used to be, what should I do?"

The doctor replies: "Try this test to find out for sure. When your wife is in the kitchen doing dishes, stand fifteen feet behind her and ask her a question, if she doesn't respond keep moving closer asking the question until she hears you."

The man goes home and sees his wife preparing dinner. He stands fifteen feet behind her and says "What's for dinner, Honey?" No response.

He moves to ten feet behind her and asks again. No response.

Five feet, no answer. Finally he stands directly behind her and says, "Honey, what's for supper?"

She turns and in exasperation says, "For the fourth time, I SAID CHICKEN!"