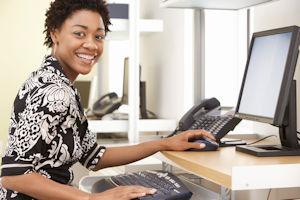 A man who worked the help desk for a large company received a call one day from a co-worker who called him because she couldn't figure out why her computer wouldn't come on.

He then asked her, "Did you turn in on?"

She said, "Yes. What do you think I am? Some kind of goober?"

So, he went to her cubicle to take a look at her computer.

She was perplexed.  "See? I plugged the computer into the surge protector."

The guy goes, "Yea, but you plugged the surge protector into itself."