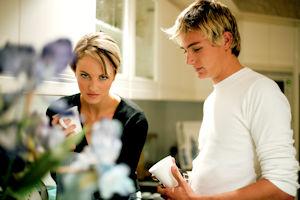 A young man called his mother and announced excitedly that he had just met the woman of his dreams. Now, what should he do?

His mother had an idea: "Why don't you send her flowers, and on the card invite her to your apartment for a home-cooked meal?"

He thought this was a great strategy, and a week later, the woman came to dinner. His mother called the next day to see how things had gone.

"I was totally humiliated," he moaned. "She insisted on washing the dishes."

"What's wrong with that?" asked his mother.

"We hadn't started eating yet."