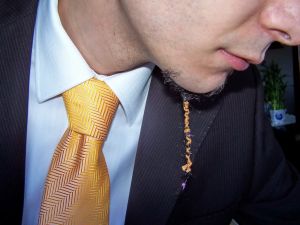 The following, allegedly, are actual post-interview excerpts collected from middle managers who, needless to say, probably did not hire any of the people mentioned here:

1. "Applicant stretched out on the floor to fill out the job application."

2. "She wore a Walkman and said she could listen to me and the music at the same time."

3. "A balding candidate abruptly excused himself. Returned to office a few minutes later, wearing a hairpiece."

4. "Applicant asked to see interviewer's resume to see if the personnel executive was qualified to judge the candidate."

5. "Applicant announced she hadn't had lunch and proceeded to eat a hamburger and french fries in the interviewer's office - wiping the ketchup on her sleeve."

6. "Stated that, if he were hired, he would demonstrate his loyalty by having the corporate logo tattooed on his forearm."

7. "Interrupted to phone his therapist for advice on answering specific interview questions."

8. "When I asked him about his hobbies, he stood up and started tap dancing around my office."

9. "At the end of the interview, while I stood there dumbstruck, he went through my purse, took out a brush, brushed his hair, and left."

10. "Applicant pulled out a Polaroid camera and snapped a flash picture of me. Said he collected photos of everyone who interviewed him."

11. "Said he wasn't interested because the position paid too much."

12. "During the interview, an alarm clock went off from the candidate's briefcase. He took it out, shut it off, apologized and said he had to leave for another interview."

13. "A telephone call came in for the job applicant. It was from his wife. His side of the conversation went like this: "Which company? When do I start? What's the salary?" I said, "I assume you're not interested in conducting the interview any farther."