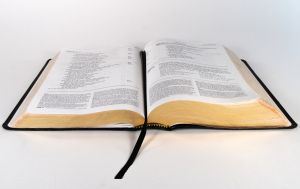 A friend of mine attended a Christian college where the tradition was to deliver a box of notes nightly from the men's' dorm to the women's dorm and vice versa.

My friend would write his fiance a note every night and close it with an inspirational Scripture reference.

One night, he meant to write the reference II Corinthians 5:1, which says:
"Now we know that if the earthly tent we live in is destroyed, we have a building from God, an eternal house in heaven, not built by human hands."

Unfortunately, he referenced I Corinthians 5:1, which says:
"It is actually reported that there is sexual immorality among you, and of a kind that does not occur even among pagans..."