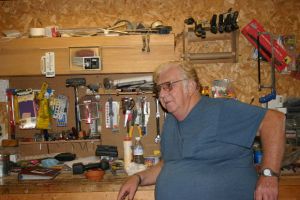 Pliers - A device used to extend your reach the necessary few inches when you drop a one-of-a-kind screw down behind the new wall it took you two weeks to install.

Multi-Pliers - Contain a handy assortment of sharp and dangerous tools. Best left in its leather sheath and worn on a homeowners belt to increase testosterone levels.

Electronic Stud Finder - An annoying device that never goes off when you point it at yourself.

Halogen Light - A work-light that lights up your backyard with the incandescence of a football stadium, causing you to cast a heavy shadow over the area you're working on so that you need to use a flashlight anyway.

Cordless Drill - A device that lessens your chance of electrocution 90% over a standard plug-in tool.

Chain Saw - Allows you to cut your way out of the shed that you accidentally built completely around yourself.

Vise Grips - A pair of helping hands that doesn't critique the job you're doing or offer advice.