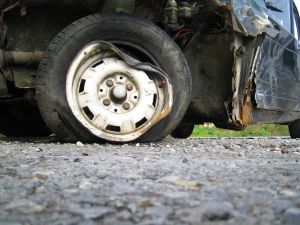 "I started to slow down but the traffic was more stationary than I thought."

"I pulled into a lay-by with smoke coming from under the bonnet.  I realized the car was on fire so took my dog and smothered it with a blanket."

Q: Could either driver have done anything to avoid the accident?
A: Travelled by bus?

"On approach to the traffic lights the car in front suddenly broke."

"I didn't think the speed limit applied after midnight"

"I knew the dog was possessive about the car but I would not have asked her to drive it if I had thought there was any risk."

"I pulled away from the side of the road, glanced at my mother-in-law and headed over the embankment."

"The other car collided with mine without giving warning of its intention."

"I collided with a stationary truck coming the other way"

"A truck backed through my windshield into my wife's face"

"A pedestrian hit me and went under my car"

"In an attempt to kill a fly, I drove into a telephone pole."

"I had been shopping for plants all day and was on my way home.  As I reached an intersection a hedge sprang up obscuring my vision and I did not see the other car."

"I was on my way to the doctor with rear end trouble when my universal joint gave way causing me to have an accident."

"To avoid hitting the bumper of the car in front I struck the pedestrian."

"My car was legally parked as it backed into the other vehicle."

"An invisible car came out of nowhere, struck my car and vanished."

"I was thrown from the car as it left the road.  I was later found in a ditch by some stray cows."