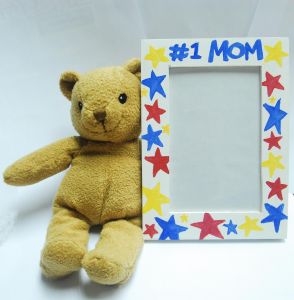 PAUL REVERE'S MOTHER: "I don't care where you think you have to go, young man. Midnight is past your curfew!"

MARY, MARY, QUITE CONTRARY'S MOTHER: "I don't mind you having a garden, Mary, but does it have to be growing under your bed?"

MONA LISA'S MOTHER: "After all that money your father and I spent on braces, Mona, that's the biggest smile you can give us?"

HUMPTY DUMPTY'S MOTHER: "Humpty, if I've told you once, I've told you a hundred times not to sit on that wall. But would you listen to me? Noooo!"

COLUMBUS' MOTHER: "I don't care what you've discovered, Christopher. You still could have written!"

BABE RUTH'S MOTHER: "Babe, how many times have I told you-quit playing ball in the house! That's the third broken window this week!"

MICHELANGELO'S MOTHER: "Mike, can't you paint on walls like other children?
Do you have any idea how hard it is to get that stuff off the ceiling?"

NAPOLEON'S MOTHER: "All right, Napoleon. If you aren't hiding your report card inside your jacket, then take your hand out of there and prove it!"

CUSTER'S MOTHER: "Now, George, remember what I told you-don't go biting off more than you can chew!"

ABRAHAM LINCOLN'S MOTHER: "Again with the stovepipe hat, Abe? Can't you just wear a baseball cap like the other kids?"

BARNEY'S MOTHER: "I realize strained plums are your favorite, Barney, but you're starting to look a little purple."

MARY'S MOTHER: "I'm not upset that your lamb followed you to school, Mary, but I would like to know how he got a better grade than you."

BATMAN'S MOTHER (work with me): "It's a nice car, Bruce, but do you realize how much the insurance is going to be?"

GOLDILOCKS' MOTHER: "I've got a bill here for a busted chair from the Bear family. You know anything about this, Goldie?"

LITTLE MISS MUFFET'S MOTHER: "Well, all I've got to say is if you don't get off your tuffet and start cleaning your room, there'll be a lot more spiders around here!"

ALBERT EINSTEIN'S MOTHER: "But, Albert, it's your senior picture. Can't you do something about your hair? Styling gel, mousse, something...?"

GEORGE WASHINGTON'S MOTHER: "The next time I catch you throwing money across the Potomac, you can kiss your allowance good-bye!"

JONAH'S MOTHER: "That's a nice story, but now tell me where you've really been for the last three days."

SUPERMAN'S MOTHER: "Clark, your father and I have discussed it, and we've decided you can have your own telephone line. Now will you quit spending so much time in all those phone booths?"

THOMAS EDISON'S MOTHER: "Of course I'm proud that you invented the electric light bulb, Thomas. Now turn off that light and get to bed!"