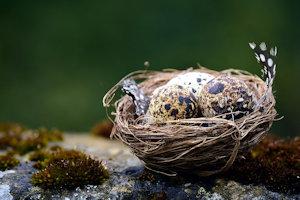 A Goober named Pam is appearing on "Who Wants To Be A Millionaire" with Regis Philbin.

Regis: "Which of the following birds does not build its own nest? Is it A) robin, B) sparrow, C) cuckoo, or D) thrush."

Regis: "Hello Carol, it's Regis Philbin from Who Wants to be a Millionaire. I have your friend Pam here who needs your help to answer the one million dollar question. The next voice you hear will be Pam's..."

Pam: "Carol, which of the following birds does not build it's own nest? Is it A) robin, B) sparrow, C) cuckoo, or D) thrush."

Regis: "Is that your final answer?"

Regis: "Are you confident?"

Regis: "You said C) cuckoo, and you're right! Congratulations, you have just won one million dollars!"

To celebrate, Pam flies Carol to New York. That night they go out on the town. As they're celebrating, Pam looks at Carol and asks her, "Tell me, how did you know that it was the cuckoo that does not build its own nest?"

"That's easy, everybody knows they live in clocks.”