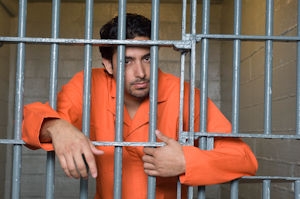 A first-time prisoner is placed in his cell with a cellmate. Before long it is time for "lights out" and the cell-block becomes dark nearly silent.

Eventually, a voice from across the cell-block cries out "twenty-two!" and everyone breaks out into loud and prolonged laughter. A little while later another voice calls out "forty-one!" and again the entire cell-block enjoys a hearty laugh.

The new prisoner is confused and asks his cellmate what this is all about. The cellmate replies that they have been in prison so long that rather than tell the same jokes over and over, they have assigned numbers to them as a more efficient way to tell jokes. The new prisoner asks if he could give it a try. His cellmate says "Sure, why not tell number eighteen!"

No response whatsoever.....not even a snicker! The new prisoner is confused and asks his cellmate what went wrong.

The cellmate replies, "Some people just don't know how to tell a joke!"