Pastor Tim as the Dumb Guy 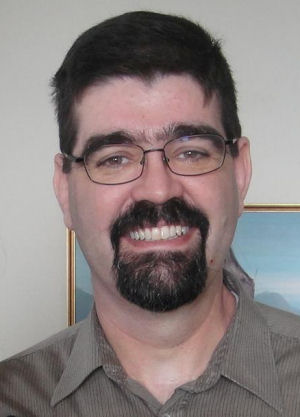 As it turns out, the window Pastor Tim brought came from a stolen car. The three men are arrested, taken to jail, and put in separate cells. Somehow, the smart guy manages to get hold of the keys, and unlocks each of their cells. They then proceed to escaping through a window.

The smart guy goes first, and sees a wall blocking his escape route. He also sees a tall tree next to the wall, which he starts climbing, figuring this was the only way to get past the wall. As the smart guy reaches the top of the wall, a guard on the other side hears him.

"Who's there?" asked the guard.

The smart guy replies with a convincing "Meow. Meow."

The average guy goes next. He climbs the same tree, and the same guard hears him.

"It's only a bird in a tree," the guard mutters. And, last but not least, it is now Pastor Tim's turn to escape. Now Tim has been watching the others make their escapes, and he likes their approach. So, he climbs the same tree, to get over the same wall, and meets the same guard. Meanwhile, Tim has been concentrating - what's wrong with that picture? -: Ok, animal noises. Think animal noises. Of course, the guard hears him, and asks, "Who's there?"

All three men are recaptured, and taken, as targets, to the firing range as punishment for their jailbreak. The smart guy, as usual, goes first. They bring him out, and the man in charge yells, "Ready...Aim..-" But before he got a chance to continue, the smart guy yells, "Earthquake!!"

Everyone ducks and covers, and the smart guy gets away.

Next, the average guy is brought out. Again, the man in charge yells, "Ready...Aim..-"

They all scatter, and the average guy gets away.

Finally, they bring Pastor Tim out. Once again, Pastor Tim has been watching the other two, and, once again has been concentrating - twice in the same day?!