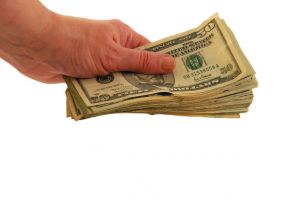 After everything is done at the funeral home and cemetery, she tells her closest friend that she has no money left.

The friend says, "How can that be? You told me you still had $20,000 left just a few days before your husband died. How could you be broke?"

The widow says, "Well, the funeral home cost me $5,000. And of course, I had to make the obligatory donation to the church, so that was another $5,000. The rest went for the memorial stone."