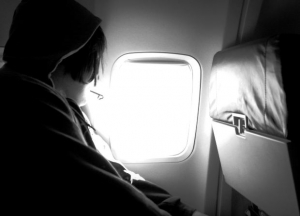 Aboard a flight from L.A. to New York, Grandma Esther was taking her very first flight.

They had only been aloft a few minutes when the elderly lady complained to the stewardess that her ears were popping.

The girl smiled and gave the older woman some chewing gum, assuring her that many people experienced the same discomfort.

When they landed in New York, Grandma thanked the stewardess.

"The chewing gum worked fine," she said, "but tell me, how do I get it out of my ears?"