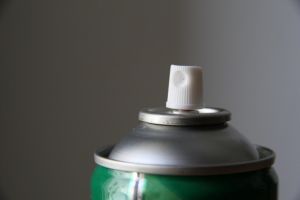 It was in the early 1960's and spray deodorant, new to the market, was being advertised on television about six times a day. I was still living at home with my parents saving money for college. One afternoon after a hard day of construction and before dinner I took a nice hot shower.

After drying off I spotted a new spray can on the bathroom shelf.

The label read "SafeGuard" and I was so surprised that my mom had bought some of that new deodorant so I sprayed a liberal amount under each arm.

When I entered the kitchen, where mom was fixing dinner, I thanked her for getting some new spray deodorant but also complained that it was pretty sticky and I didn't know if I really liked it yet.

Her response still rings in my ears - "I didn't buy any spray deodorant, but I did buy some of that new bandage spray, SafeGuard!"

After shaving my armpits, attempting to lift my arms, and enduring hours of laughter by my entire family, I realized that RightGuard and SafeGuard were not the same thing.