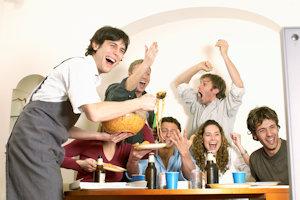 Becky prepared a pasta dish for a dinner party she was giving. In her haste, however, she forgot to refrigerate the spaghetti sauce, and it sat on the counter all day. She was worried about spoilage, but it was too late to cook up another batch. She called the local Poison Control Center and voiced her concern. They advised Becky to boil the sauce again.

That night, the phone rang during dinner, and a guest volunteered to answer it. Becky's face dropped as the guest called out, "It's the Poison Control Center. They want to know how the spaghetti sauce turned out."