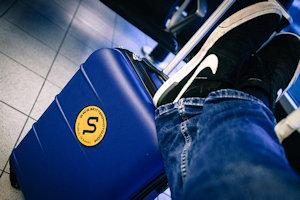 On the way back to New York as I was sitting in the Phoenix airport, they announced that the flight to Vegas was full. The airline was looking for volunteers to give up their seats. In exchange, they'd give you a $100 voucher for your next flight and a first class seat in the plane leaving an hour later. About eight people ran up to the counter to take advantage of the offer.

About 15 seconds later all eight of those people sat down grumpily as the lady behind the ticket counter said,

"If there is anyone else OTHER than the flight crew who'd like to volunteer, please step forward..."