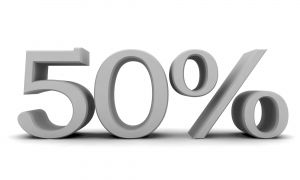 A member of the Senate, known for his hot temper and acid tongue, exploded one day in mid-session and began to shout, "Half of this Senate is made up of cowards and corrupt politicians!"

All the other Senators pleaded to the angry member that he withdraw his statement or be removed from the remainder of the session.

After a long pause, the angry member accepted.

Half of this Senate is NOT made up of cowards and corrupt politicians!"