*Stupid Things Actually Said By Commentators In The World Of Soccer*

*Stupid Things Actually Said By Commentators In The World Of Soccer* 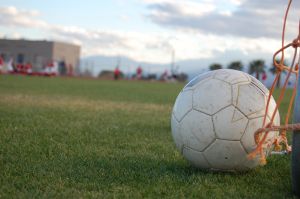 1.  Well, it's Liverpool two, Ipswich nil, and if the score stays this way, I've got to fancy Liverpool for the win.

2.  He had an eternity to play that ball, but took too long.

4.  With the last kick of the game, he scored with a header.

5.  Well, it's a fabulous kaleidoscope of colour: almost all the Brazilians are wearing yellow shirts.

6.  If that had gone on, it would definitely have been a goal.

7.  Their manager, Howard Wilkinson, isn't here today, which strongly suggests that he may be elsewhere.

8.  I am a firm believer that if one team scores a goal, the other need to score two to win.

9.  If a team scores early on, it often takes an early lead.

10.  You cannot possibly have counted the number of passes made, but there were eight.