The Gift That Keeps On Giving

This is a really long item, but well worth the read!

The one present Roy Collette wasn't looking forward to getting for Christmas 1988 was those pants. Yet he knew he was in trouble as soon as the flatbed truck bearing a concrete-filled tank off a truck used to deliver ready-mix rolled up. Sure as God made little green apples, those pants had to be in there. And he was going to have to fish them out, else declare his brother-in-law the winner of a rivalry that had spanned 20 years. 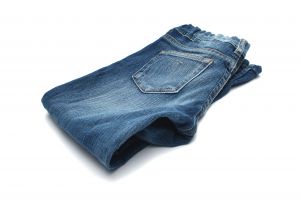 Being the sport he is, brother-in-law Larry Kunkel thoughtfully supplied the services of a crane to hoist the concrete-filled tank off the flatbed.

What's this game, you ask? What was the significance of these pants, and why were two grown men going to such efforts year after year to retrieve them, only to send them off again?

It all began in 1964 when Larry Kunkel's mom gave him a pair of moleskin pants. After wearing them a few times, he found they froze stiff in Minnesota winters and thus wouldn't do. That next Christmas, he wrapped the garment in pretty paper and presented it to his brother-in-law.

Brother-in-law Roy Collette discovered he didn't want them either. He bided his time until the Christmas after, then packaged them up and gave them back to Kunkel. This yearly exchange proceeded amicably until one year Collette twisted the pants tightly and stuffed them into a 3-foot-long, 1-inch wide pipe.

And so the game began. Year after year, as the pants were shuffled back and forth, the brothers strove to make unwrapping them more difficult, perhaps in the hope of ending the tradition. In retaliation for the pipe, Kunkel compressed the pants into a 7-inch square, wrapped them with wire and gave the "bale" to Collette. Not to be outdone, Collette put the pants into a 2-foot-square crate filled with stones, nailed it shut, banded it with steel and gave the trusty trousers back to Kunkel.

The brothers agreed to end the caper if the trousers were damaged. But they were as careful as they were clever. As the game evolved, so did the rules. Only "legal and moral" methods of wrapping were permitted. Wrapping expenses were kept to a minimum with only junk parts used. Kunkel next had the pants mounted inside an insulated window that had a 20-year guarantee and shipped them off to Collette.

Collette broke the glass, recovered the trousers, stuffed them into a 5-inch coffee can, which he soldered shut. The can was put in a 5-gallon container filled with concrete and reinforcing rods and given to Kunkel the following Christmas.

Kunkel installed the pants in a 225-pound homemade steel ashtray made from 8-inch steel casings and etched Collette's name on the side. Collette had trouble retrieving the treasured trousers, but succeeded without burning them with a cutting torch.

Collette found a 600-pound safe and hauled it to Viracon Inc. in Owatonna, where the shipping department decorated it with red and green stripes, put the pants inside and welded the safe shut. The safe was then shipped to Kunkel, who was the plant manager for Viracon's outlet in Bensenville.

The pants next turned up in a drab green, 3-foot cube that once was a 1974 Gremlin. A note attached to the 2,000-pound scrunched car advised Collette that the pants were inside the glove compartment.

In 1982 Kunkel faced the problem of retrieving the pants from a tire 8 feet high and 2 feet wide and filled with 6,000 pounds of concrete. On the outside Collette had written, "Have a Goodyear."

In 1983 the pants came back to Collette in a 17.5-foot red rocket ship filled with concrete and weighing 6 tons. Five feet in diameter, with pipes 6 inches in diameter outside running the length of the ship and a launching pad attached to its bottom, the rocket sported a picture of the pants fluttering atop it. Inside the rocket were 15 concrete-filled canisters, one of which housed the pants.

Collette's revenge for the rocket ship was delivered to Kunkel in the form of a 4-ton Rubik's Cube in 1985. The cube was made of concrete that had been baked in a kiln and covered with 2,000 board feet of lumber.

Kunkel "solved the cube," and for 1986 gift-giving repackaged the pants into a station wagon filled with 170 steel generators all welded together. Because the pants have to be retrieved undamaged, Collette was faced with carefully taking apart each component.

What happened to the pants in 1987 is a mystery, and their 1988 packaging (concrete-filled tank) was mentioned at the beginning of this page. Sadly, 1989's packaging scheme brought the demise of the much-abused garment.

Collette was inspired to encase the pantaloons in 10,000 pounds of jagged glass that he would then deposit in Kunkel's front yard. "It would have been a great one - really messy," Kunkel ruefully admitted. The pants were shipped to a friend in Tennessee who managed a glass manufacturing company. While molten glass was being poured over the insulated container that held them, an oversized chunk fractured, transforming the pants into a pile of ashes.

The ashes were deposited into a brass urn and delivered to Kunkel along with this epitaph:

Sorry, Old Man Here lies the Pants. . . An attempt to cast the pants in glass brought about the demise of the pants at last.

The urn now graces the fireplace mantel in Kunkel's home.