Top Ten Signs You're in for a Long Sermon 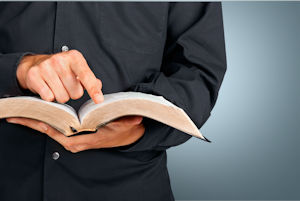 10. There's a case of bottled water beside the pulpit in a cooler.

9. The pews have camper hookups.

8. You overhear the pastor telling the soundman to have a few dozen extra tapes on hand to record today's sermon.

7. The preacher has brought a snack to the pulpit.

6. The preacher breaks for an intermission.

5. The bulletins have pizza delivery menus.

4. When the preacher asks the deacon to bring in his notes, he rolls in a filing cabinet.

3. The choir loft is furnished with La-Z-Boys.

2. Instead of taking off his watch and laying it on the pulpit, the preacher turns up a four-foot hour-glass.

AND THE NUMBER ONE SIGN YOU'RE IN FOR A LONG SUNDAY SERMON
1. The minister says, "You'll be out in time to watch the super bowl" but it's only November!