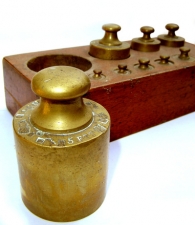 Somewhat skeptical of his son's new found determination to become Charles Atlas, the father nevertheless followed the teenager over to the weight-lifting department, admiring a set of weights.

"I don't know, Michael. It's really a commitment on your part," the father pointed out.

"They're not cheap either," the father came back.

Finally won over, the father paid for the equipment and headed for the door.

From the corner of the store he heard his son yelp, "What! You mean I have to carry them to the car?"