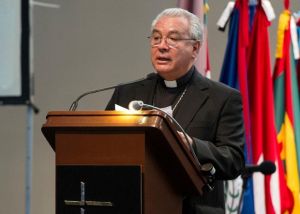 Years ago, when our daughters were very young, we'd drop them off at our church's children's chapel on Sundays before the eleven o'clock service.

One Sunday, just as I was about to open the door to the small chapel, the minister came rushing up in full vestments. He said he had an emergency and asked if I'd speak to the children at their story time. He said the subject was the Twenty-third Psalm.

But just as I was about to get up from the back row and talk about the good shepherd, the minister burst into the room and signaled to me that he would be able to do the story time after all.

He told the children about sheep, that they weren't smart and needed lots of guidance, and that a shepherd's job was to stay close to the sheep, protect them from wild animals and keep them from wandering off and doing dumb things that would get them hurt or killed.

He pointed to the little children in the room and said that they were the sheep and needed lots of guidance.

Then the minister put his hands out to the side, palms up in a dramatic gesture, and with raised eyebrows said to the children, "If you are the sheep then who is the shepherd?" He was pretty obviously indicating himself.

A silence of a few seconds followed. Then a young visitor said, " Jesus, Jesus is the shepherd."

The young minister, obviously caught by surprise, said to the boy, "Well, then, who am I?"

The little boy frowned thoughtfully and then said with a shrug, "I guess you must be a sheep dog."