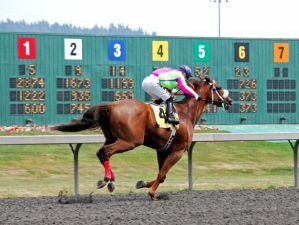 A jockey is in the parade ring discussing race tactics with the horse's trainer. The trainer tells the jockey that this is the worst horse he has ever seen. It has had 23 races and finished last in every one of them. If it doesn't win today the milkman will be using it for deliveries in the morning.

The jockey mounts up and takes the horse down to the start.

The race begins and the horse is immediately 10 lengths behind the pack. So the jockey gives the horse a sharp thwap on the shoulder.

He then gives him a series of strikes on the rump.

He then gives him two wallops right on the hindquarters.

The horse comes to a sudden stop, turns to the jockey and says "Give it a rest with that whip, will ya, buddy? I have to be up at four in the morning to deliver milk."