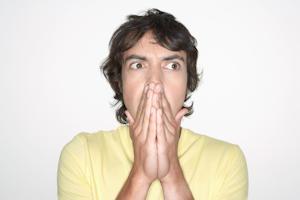 What was that noise? He could have sworn he just heard music coming from somewhere. But that was impossible. He was alone in the house.

There it was again, coming from outside the bedroom door. Familiar music that he couldn't place. It certainly wasn't coming from his stereo since there wasn't anything remotely like it in his extensive collection of music. He preferred rock but this was something else entirely.

Suddenly, there was an outburst of laughter as if a big party was in full swing downstairs. Loud voices and hoots echoed off the walls as the volume increased.

He clutched the sheets in fear, hauling them over his head to try to block out the noise coming from the empty house. Could he be dreaming? Was this all a figment of an overworked imagination?

No sooner had he asked himself these questions when the bedroom door flew open, embedding the knob in the freshly painted wall. He nearly jumped out of the sheets, and his skin, at the same time. What was that? His heart seemed to be looking for the easiest path out of his chest.

''Who's there?" he asked timidly. No answer. The racket continued unabated downstairs.

I've got to be flipping out, he thought. Maybe a nervous breakdown. That had to be it. The house was empty and he was alone. But the music continued nonetheless. Um-pum-pum, um-pum-pum.

Trembling, he inched his way out of bed and moved toward the door. Laughter erupted as he crossed the floor. He whipped his head around to make sure no one was behind him. Downstairs, accordions and drums blasted an incessant beat into his terrified brain as he edged out into the hallway.

Nothing. No lights, no flickering shadows. He had to be losing his mind.

That beat, repetitious and boring. An odd beat with the accent on the last half. Most unusual.

He felt his way to the top of the stairs, not daring to turn on any lights for fear he might see something he really didn't want to confront. He peered into the darkness. Still as death, he thought, and quickly wiped the unfortunate choice of metaphor from his mind.

He made his way quietly down the stairs and reached for the switch. As his fingers searched, something cold and slimy clamped itself over his hand. He reeled back in horror as something laughed in his ear.

Then something glowing flashed in front of his face and flew up the stairs. A cold, thin tendril wrapped around his ankles and slithered up his leg.

He was cemented to the floor. His eyes were wide with terror as the laughter and the music reached ear-splitting levels. Then it dawned on him. Of course. He had been so stupid. He should have stayed in bed, maybe then he would have had a chance.

But now it was too late. A scream erupted from his tortured lips as he slipped to the floor.

Um-pum-pum, um-pum-pum. That beat! It was pounding mercilessly into his very soul. He watched in dread fascination as one of his feet began to jerk back and forth in time to the music. They were inside his body now. He tried to form the word but could barely move his lips.