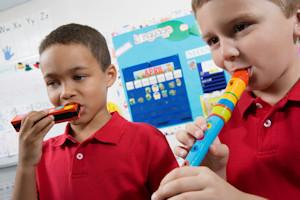 The summer band class was just getting under way when a large insect flew into the room.

The sixth-graders, eager to play their shiny new instruments, tried to ignore the buzzing intruder, but eventually one student, Tommy, could stand it no more.

He rolled up his music book and swatted the insect, then he stomped on it to ensure its fate.

"Is it a bee?" another student asked.