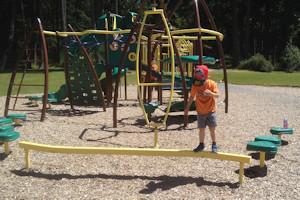 We took my sons, ages seven and five, up to Friendship Park for a picnic.

My seven year old read the sign with all the playground rules to his brother.

"Do not jump on the merry-go-round when in motion."

"Go down the slide while sitting, only."

"Only one child on a swing at a time."

There were a good twenty rules posted on this particular sign.

The boys promised to obey them if I would let them play without standing by. So, I joined my wife at the picnic table.

Just before it was time to eat, I went over and watched them play. They were obeying the rules, that is, all but one. On the tall spiral slide, they were coming down head first!

I took them over to the posted regulations. We read them, again. I asked the boys what they had to say for themselves.

"Oh, don't be silly, Dad. No one uses the slide rule anymore!"