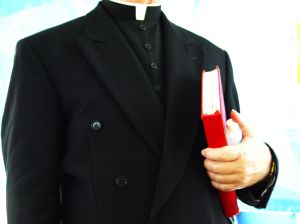 Hans Grapje was raised in a Catholic school in The Hague and, as a young man, aspired to become a priest, but was drafted into the Army during WWII and spent two years co-piloting B17s until his aircraft was shot down in 1943 and he lost his left arm.

Captain Grapje spent the rest of the war as a chaplain, giving spiritual aid to soldiers, both Allied and enemy. After the war, he became a priest, serving as a missionary in Africa, piloting his own plane (in spite of his handicap) to villages across the continent.

In 1997, Father Grapje was serving in Zimbabwe when an explosion in a silver mine caused a cave-in. Archbishop Grapje went down into the mine to administer last rites to those too severely injured to move. Another shaft collapsed, and he was buried for three days, suffering multiple injuries, including the loss of his right eye.

The high silver content in the mine's air gave him purpura, a life-long condition characterized by purplish skin blotches.

Although Cardinal Grapje devoted his life to the service of God as a scholar, mentor, and holy man, church leaders agree: he will never ascend to the Papacy.

No one wants a one-eyed, one-armed, flying purple Papal leader.