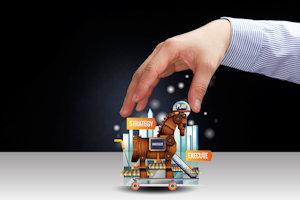 A Spanish King was being attacked constantly by warlords. He called his advisors together and asked them to come up with a solution.

One said, "Remember the Greeks and the Trojan Horse?"

"Let's find out what the warlords like and we'll do the same trick."

"We know they won't eat pork, so a pig is not the answer. Chickens! They love chickens and eggs."

The Spanish King asked his carpenters to build a giant chicken, but they said it was too complicated, so they decided to build a giant wooden egg. They filled the egg with Basque mercenaries and rolled it in front of the warlord encampment.

"Oh mighty Chief, we have brought you a gift."

The warlords pulled the wooden egg inside their encampment. Soon there was great activity in the warlords camp -- they were feverishly building a giant pot. When they finished, they filled it with water and hauled the giant egg up into the water filled pot, and lit a fire under it. They were going to make a giant hard boiled egg breakfast for the troops! Soon smoke rose from the center of the camp.

The Basques realized they were cooking the egg!

Moral: Don't put all your Basques in one egg!