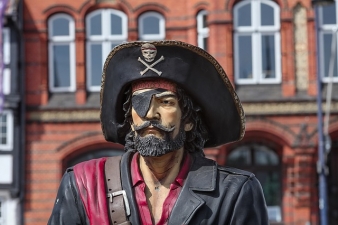 A pirate captain was out to retrieve his buried treasure.

After months of hard sailing, his ship caught sight of land, the land to which his treasure map had been leading. He and his first mate disembarked on the island to search out the buried treasure, which was supposed to lie hidden deep within a swamp at the center of the island.

Sure enough, at the center of the island was a swamp, and the Captain and his first mate bravely entered the swamp. Soon the swamp began to get deeper, and the pirate's feet, then ankles, and finally entire leg below the knees were covered in the swamp.

It was at that time that the Captain banged his shin against something hard. He reached down, searched around, and pulled up a treasure chest. Prying the lock open, the chest revealed gold and jewels beyond imagination.

The Captain turned to his first mate and said,

"Arrrr, matey, that just goes to show ye, that booty is only shin deep!"