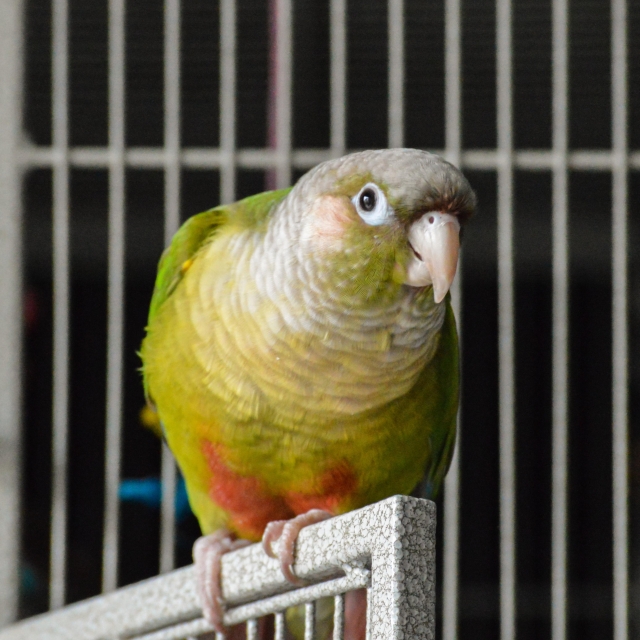 Many of you will remember the story of “Bang” - a peach fronted conure that hit one of the windows of Cybersalt World Headquarters in June of 2011 and subsequently became part of our “flock” after we could not track down its owners (see - “Bang!”).Bang brought a lot of fun and entertainment into our lives, but on this past Sunday he/she (we never knew what gender Bang was) went to a new home with a parrot lover half an hour away from us.

Of everyone in the house, Bang bonded the most with me.This was probably due to my being the first person he saw in the morning when I uncovered his cage and delivered fresh seed and water for the beginning of the day. I like to think he was also in awe of me because I was the one who turned the sun on - a trick I like to call “opening the curtains.” For whatever reason, Bang’s little bird brain liked me the most.I’ll always remember Bang as a fun bird who would land on my shoulder for a sunflower seed while I worked at the computer, liked his share of my vanilla ice cream cones, and who enjoyed long walks on the beach together - well would have if I had ever taken him on any.

At this point you are probably wondering why Bang has a new home.

The reason is because that bird was driving me crazy! I could not leave the room without Bang calling to me every 3 seconds until I returned. When I did return and sat down at my desk to work, he would squawk every time I shifted my weight and my chair creaked. If I tried to talk on the phone, Bang would yell over and over and over as if to say, “Get the *BEEP* off the phone!”And when anyone other than the 5 people he was used to came into the room, he would scream out his alarm cry to warn me that danger had invaded the flock and would only go quiet when they left or if I covered his cage with a sheet. 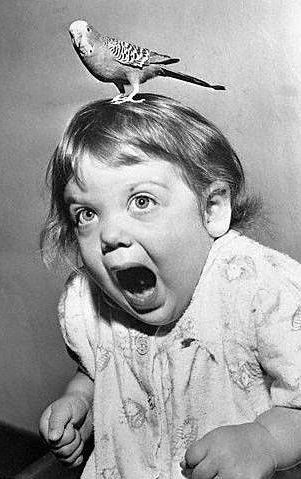 I understood that Bang was just being a bird and his little brain was only running conure v1.0. And I did try to practice serenity so I could continue to enjoy his good side because I do like birds. But in the last couple of months I realized I was failing in my quest when I noticed myself tiptoeing around the house so I could have some peace and quiet.The final straw came when I realized that all that “Banging” in my head was leaving my nerves frayed and my temper short with my family. That’s when I knew that Bang needed a new family because to keep him would be unfair to my own.

That realization and my decision to act on it created a new painful stress for me because I did really like that little bird and didn’t want to feel the sadness of giving him up.As with all healthy humans, I did not feel like doing what would me make feel sad - even if it was for the best.As I dragged my feet on finding a new home for Bang, I pondered others who allowed their pets to wreck their lives.One lady who was incredibly ill all the time, found out she was allergic to her cat and then would not find it a new home.Another woman in our community rescued a bunch of rabbits and then neglected her children, alienated her neighbours, and fell way behind on her utility bills.And then there was the man who was perplexed about his choice between the neighbourhood stray he cared for and the woman he loved and was engaged to (I kid you not!)

Don’t get me wrong, I am all for having pets and taking proper care of them when it makes sense.I just don’t think that pets should come before caring for people (family, friends and strangers) when it comes to living healthy, balanced, and moral lives as humans.One example of this expressed in our household is that when we got a dog we also adopted an overseas child through a relief organization.We did not want to spend more money feeding a pet than we did a hungry child somewhere in the world.As a result our children grew up knowing the fun and responsibility of Maggie (our blue heeler/collie cross) as well as her proper place in God’s order of creation.

Another example of my philosophy of pets at work is I don’t donate money to organizations that perpetually care for animals that aren’t in danger of extinction.I think it is horrible that so much of society is cranked about not putting unwanted pets and animals down humanely while at the same time being so nonplussed about letting human beings live and die slow, miserable lives.Sure, there are parts of the world where such things cannot easily be helped due to the political circumstances in the nation or region where they are happening.But there are still plenty of places where a difference can be made - including our own country where we could go a lotfurther caring for our homeless and mentally ill on the streets.Yes, the often long slog of human rescue is a lot harder than animal rescue with it’s more immediate success and accompanying sense of warm and cute, but worthy charitable pursuits should be determined by the hierarchy of those in need, not what makes us feel good.To paraphrase my eldest daughter, Alyssa Sampson, “We should not let the arrival of emotions be our only evidence that we’ve made a wrong choice.” Actively doing what is right but hard emotionally is not a threat to life, it is evidence of a balanced and healthy life being lived.

And so, Bang has a new home because people are more important than pets.It’s simply the way it should be.>