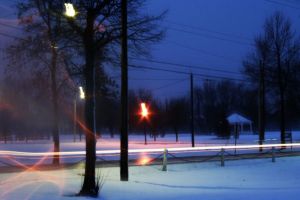 The highway was bare, not a car was in sight and bright moonlight on fields of surrounding snow on this January night made for easy visibility—I hardly even needed headlights.I had been away for the better part of a week and was eager to get home. So I pressed on the accelerator and sped up to seventy miles an hour. It was just past ten o’clock and there were few other travelers on the road. When I left the airport in Regina, Saskatchewan, the temperature was close to thirty degrees below zero, but with no wind and a perfectly clear night, I had the highway to myself.

I turned off the Trans-Canada highway, route number one, and was headed north and east on Saskatchewan route ten toward Manitoba and my home in the town of Dauphin. I would get home somewhere around two AM. I turned on my radio and settled in for a long uneventful ride home.

After about half an hour the thought struck me, “what a waste of time listening to the radio.”

As a pastor, I would encourage my congregation in their relationship with God and here I was wasting time which might be usefully invested. Pleased with the thought, I turned off the radio and began a dialogue with The Lord. I imagined Jesus in the seat next to me and began talking. I cannot remember a thing I spoke, but I do remember saying out loud, “OK, now it’s your turn if you have anything you want to say to me. I am willing to listen.”

A few moments went by then as clear as can be, not audibly, but in my mind or spirit, I heard these words: “Slow down.”

I sat at the wheel quite taken aback. I am not sure what I did expect, but two words, “Slow down”, was not what I wanted to hear. I wanted to get home as quickly as I could and I was sure that seventy miles an hour on a straight, clear stretch of deserted highway was fine.

I sat and deliberated, then muttered, “OK, I guess I am speeding.” The posted speed limit was sixty miles per hour and I was exceeding it. “I am a believer and need to obey traffic laws”.

So I slowed my car to the posted speed limit of sixty. And in an act that embarrasses me on reflection, I reduced it to fifty nine on my speedometer. If The Lord wanted me to keep to the speed limit, I would go one mile per hour better than that. And with that, the dialogue was over for that evening. I don’t remember if the radio came back on or not, but it might as well have.

My home in Manitoba was almost exactly two hundred miles from the airport in the city of Regina which I normally used for long flights. The trip from Regina to Dauphin was just about four hours exactly. Mid way between Regina and Dauphin was the small city of Yorkton, in Saskatchewan near the Manitoba border on route ten. I planned a brief stop to top up the gas in my car, have a cup of coffee and use the rest room, before the final two hour leg of my trip eastward. I would arrive in Yorkton about midnight, but was not concerned as I knew a couple of gas stations which were open all night. But something had changed since the last time I had been through—the gas stations along main street were all closed. In fact at midnight on a cold January night, nothing was open.

Driving an automobile at deep sub zero temperatures, one significant factor is important to know: you burn more gasoline at those temperatures, and high speeds increased the gas consumption. My Dodge Dart had a small V-8 and was not an enormous gas guzzler; but by the time I arrived in Yorkton, I was already showing below half a tank. I had a decision to make. I could do the safe and prudent thing and find accommodation and finish the rest of my trip home in the morning on a full tank of gas. But I was in my late twenties; and prudence was not my number one virtue, so I decided to strike out eastward and finish the journey that night.

Heading east, I slowed to fifty miles an hour. By the time I crossed the provincial border on Manitoba highway 5, the needle on my gas gauge was showing well under half a tank—closer to a quarter tank of gas.

Half an hour later near the still and sleeping town of Grandview, I slowed further to just under fifty miles an hour, forty five minutes from home. My gas gauge was under a quarter tank. By the time I was at the tiny town of Gilbert Plains, half an hour from home, I had significantly less than a quarter tank.With the gas gauge reading empty, I limped the final miles into Dauphin at thirty miles an hour along a straight and deserted stretch of highway. I am sure my knuckles were bloodless as I gripped the steering wheel—my eyes alternating between the road and the gas gauge. The last ten to fifteen miles west of Dauphin are sparsely populated and if I ran out of gas, I was in trouble. It is not unheard of to read of people freezing to death after abandoning their car on a night such as this. The temperature was well below minus thirty Fahrenheit and I was not equipped for any kind of a hike in this weather. There was not a headlight in sight anywhere, so I would be on my own.

I breathed a deep sigh of relief when Dauphin came into sight and I crossed the bridge into the town. “If I run out of gas in town, I can make it by walking”, I told myself. By the time I turned into the lane and parked my car in the rear of the house, the gas gauge was below empty—as low as I had ever seen it.

I stepped into our lovely warm house well past the two AM arrival time I had projected, but so glad to be home! I stood in the kitchen enjoying the silence of our home, but chagrinned at my impetuousness and what I realized had just happened.

I breathed out a prayer, “I am sorry. You were just trying to tell me that if I wanted to get home tonight, I would have to slow down. You knew the gas stations in Yorkton were closed. I thought You were just holding me back, but You were helping me to get home safely tonight and I should have known better. Thank you.”

Then I headed up the stairs to where my young family slept.