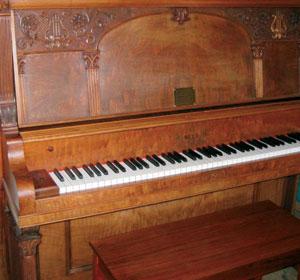 If you visit St. Andrew’s in Victoria, you will find an upright Bell piano with a brass plaque that tells the story of how God sent a piano across the country to find a son in exile.

David Vuckson comes annually to tune our piano at West Shore, a new church in Victoria’s western suburbs. When he does, I enjoy looking over his shoulder at the action of the piano that he donated. David enjoys talking about piano construction, and particularly about ours—a Gerhard Heintzman upright.

David was here in Dec. 2008 and pointed out: “Your piano is in remarkably good shape for its age.” We were within a few weeks of our piano’s 100th birthday.

“We should have a birthday party,” I suggested to David. “And how about you come and tell the story of the piano and how it changed your life?”

It was agreed that David and his wife, Pam would be our guests.

We decided upon an evening in February. David spoke of Gerhard Heintzman, the piano’s manufacturer:

“He came to Canada to work with his uncle Theodore making pianos, only to strike out on his own to build what he thought would be a superior piano,” David told us. “His new piano was built like the proverbial battleship, and Mr. Heintzman took the novel approach of adding a metal bridge to enhance rather than dampen the harmonic seventh.”

I have no idea what that means, but David makes it sound like something to which every church parlour should aspire. Note to self—never dampen your sevenths.

In addition to his concert, which sent everyone home singing old Broadway show tunes, David told us how God used a piano to find him and Pam and lead them back to faith.

David was raised in Collingwood, Ont., where he attended First Presbyterian. Eventually he drifted away from home and from his faith. He moved to the west coast where he pursued his profession tuning pianos, not giving much thought to his creator. One day while working in the music shop, one of his colleagues mentioned they had acquired a Bell piano taken in on consignment.

“I learned to play on a Bell back home in Ontario, so I decided to check out the old piano,” recalls David. “I thought, ‘Hey, it has the same scroll work as mom’s old piano. And it had nicks and scrapes in the same places ours did.'”

This was too much of a coincidence for David, so he removed a key in the lower register, and found his own signature and the date: Dec. 3, 1965. His childhood piano had followed him from Ontario to Vancouver Island, and showed up where David worked to send him a message:

Some might see a coincidence and no more. But the Holy Spirit used this improbable coincidence to tap David on the shoulder. And most importantly, David heard the voice.

Over tea and toast in Victoria I said, “David, a person who hears this would want to know how finding your old piano led you to believe that it was God in the finding.”

David quoted the gospel of John: “Except the Spirit draws a person, no one comes to God”.

He elaborated: “The moment I saw it was my old boyhood piano it was as if all my boyhood came flooding back to me, and with it, memories of my boyhood faith.”

“So it was the catalyst for the nudging of the Spirit?” I asked.

“Yes, exactly. Pam and I joined an Alpha group and reaffirmed our adult faith.”

David bought the piano and donated it to St. Andrew’s, recommending that the church give its spare piano, the Heintzman, to West Shore. And so David’s boyhood Bell piano sits in St. Andrew’s social suite as a reminder both of the lengths God will go, and that He will use the language you know best to remind you where home is.

- Dr. Harold McNabb
This article originally appeared in the Presbyterian Record and is appears here by permission of the author.