Regardless of your political stripe, you have to admit that Barak Obama's inauguration was a pretty impressive event. And to go along with the event, some pretty impressive tech stuff happened.  One was the taking of one of the highest resolution pictures ever.  So let's have some fun.

The hi-res picture of the inauguration is here.

I was not at the inauguration, but had I gone I would probably have been wearing a bright orange toque.  Like this guy: 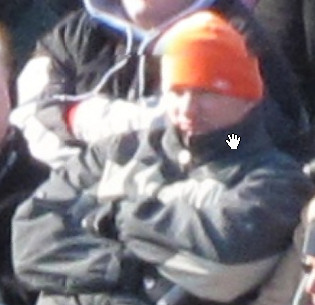 Here is the fun part.  Find the above orange toqued gentleman in the hi res picture and send me a screen shot of the people around him (one person in each direction). E-mail it to This email address is being protected from spambots. You need JavaScript enabled to view it..

Click the read more link to see the submissions of the winners.

Below, I'll post the names and screen captures of the first 3 people who find him.

OK, here are your winners in the order of those who submitted photos first:

I was pretty impressed by the speed in which Dennis Sullivan found our man.  Here's his screen capture:

The next person to find (let's call him "Mr. Orange") was Drew Allen.  Unfortunately for Drew he had a pirate moment and struggled for 6 hours trying to get his computer to e-mail the screen capture he took.  So in the end he sent this message which we will give him second place for:

I've tried for 6 hours to send screen shot.  Nothing works.  So here is the description to prove I've found him.

Just in front of him is a person in what looks similar to military field wear, for blending in with green vegetation, and wearing a dark blue baseball cap with ear muffs.  The view is from the left back side of that person who appears to be walking in the area between the fence and the first row of chairs, and is bent over almost 90 degrees, and a chain link wire fence is just in the foreground before him.  He covers the legs of the light blue denim pants worn by the orange hatted subject.   At the left of the subject is a white haired man, wearing no hat, with sun glasses and a striped muffler around his neck.  His legs are also covered by the man bent over.   Immediately to the orange hatted mans right (his left) is a darker skinned man wearing a light tan jacket with color turned up, dark grey knitted hat, glasses, and whose face below his nose is covered by the man in front of him who is wearing a dark green jacket which appears to also cover his head.  A two tone knit cap is under the coat cover.  It is dark grey in the center, and white on the right side (over HIS LEFT eye).  The change point from dark grey to white appears to be in the center above HIS LEFT eye.  He also wears sun glasses.

This is all to the right of and behind the large TV stand.  The rear of the white base area behind the stand is surrounded by a chain link wire fence which extends through the picture and appears to run two rows in front of the subject, with some open space between the chairs and the fence.  Some people are right up against the fence.

The hunt was fun.  Sorry I can't figure out how to send the picture."

That means that the sender of the second picture, Frank Vautier, get's third place for his submission: 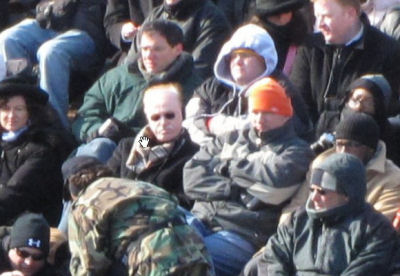 And finally, Richard "Bible Zombie" Turner get's forth with this picture: 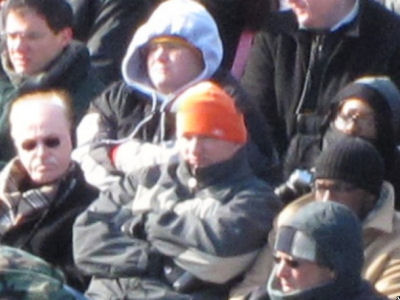 For those that could find (or be bothered to find) Mr. Orange, here is a hint as to what area he was sitting in:

Again, the hi-res picture of the inauguration is here.