Why saving money on delivery isn't always the best idea. 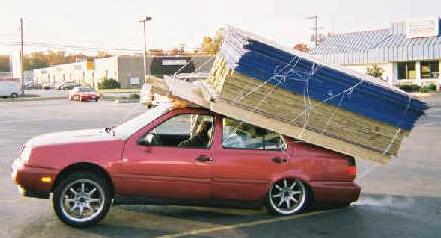 This picture is real - not doctored in anyway - and was taken by a Transportation Supervisor for a company that delivers building materials for 84 Lumber. When he saw it in the parking lot of IHOP, he went and bought a camera to take pictures.

The car is still running, as can be witnessed by the exhaust. A woman is either asleep or otherwise out in the front seat passenger side. The guy driving it was jogging up and down on Rt. 925. (in the background)

Witnesses said their physical state was OTHER than normal. The driver finally came back after the police were called, and was found crouched behind the rear of the car, attempting to cut the twine around the load! Luckily, the police stopped him and had the load removed.

The materials were loaded at Home Depot. Their store manager said they had the customer sign a waiver.  While the plywood and 2X4s are fairly obvious, what you can't see is the back seat, which contains -- are you ready for this? -- 10 bags of concrete @ 80 lbs. each. They estimated the load weight at 3000 lbs.

Both back tires exploded, the wheels bent and  the back shocks were driven through the floorboard.